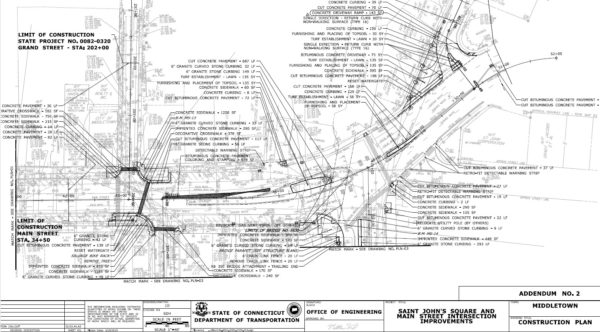 While the project to repair and replace the approach ramps and sidewalks of the Arrigoni Bridge is underway, controversy about the work continues to swirl. Apparently, CT DOT’s original plan was approved by the previous Middletown administration with no public hearing or citizen comment. The stated goal of the project, according to CT DOT, was to improve the efficiency of Main Street between Washington and Hartford Ave. and the entrances to Route 9 and the Arrigoni Bridge. DOT’s interest in reducing congestion in this area is probably related to future plans to remove traffic signals from Route 9, which will involve some changed traffic patterns in the downtown area, especially near the bridge. Here are some of the issues and concerns surrounding the project.

Contrary to state law, CT DOT clearly did not consider the needs of bicyclists using the Arrigoni Bridge in drafting their plans. Middletown’s Complete Streets Committee has objected to this oversight, but remedies at this point are unlikely. As a result, we are losing a rare opportunity to remove obstacles and safety hazards for cyclists entering and exiting the bridge sidewalks on both sides of the river. This oversight is especially maddening, since it violates DOT’s own policies and state law, and opportunities to improve the bridge access for bicyclists come only once every 20-30 years.

The removal of the mid-block crossing of Main Street near the fire station is the change perhaps most opposed by local residents, since it requires crossers to walk north to Liberty or south to Washington. The absence of a crosswalk is likely to result in more pedestrians crossing mid-block without a designated, legal crossing.

The original plan has been successfully changed in one respect. CT DOT wanted to change Rapallo Ave. into a one-way street going west, uphill from deKoven Drive to Main. Mayor Florsheim requested that it remain two-way, and CT DOT agreed.

Also, Middletown’s Complete Streets Committee reports that the city decided to make Spring Street temporarily one-way between High and Rome going east while construction is underway, thereby discouraging a high volume of cut-through traffic passing North End residences. Depending on the success of this trial, the one-way section of Spring St. may remain in place.

As for plans to remove the traffic signals from Route 9, CT DOT says it is starting over and will hold a series of charrette-style public meetings to discuss options. The department has apparently conducted a thorough study of traffic patterns downtown related to Route 9 exits and entrances, but the results of that study are either not complete or have not been publicly shared.