This article (not including the update at the end) originally appeared on June 9 in the Middletown Press. 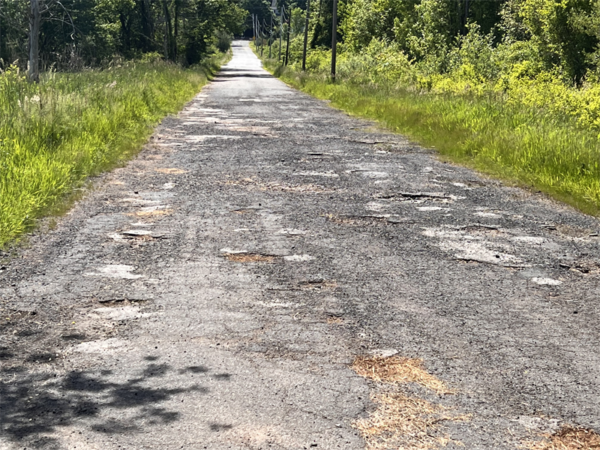 Over the past winter (2021-22) Middletown’s Department of Public Works proposed to close Lyceum Road, a 3/10-mile road south of Randolph Road, between Millbrook and Chamberlain Hill Roads. It crosses Sumner Brook (below) and its surrounding floodplain. For years, the road has been in chronically poor condition due to its low elevation and frequent flooding. 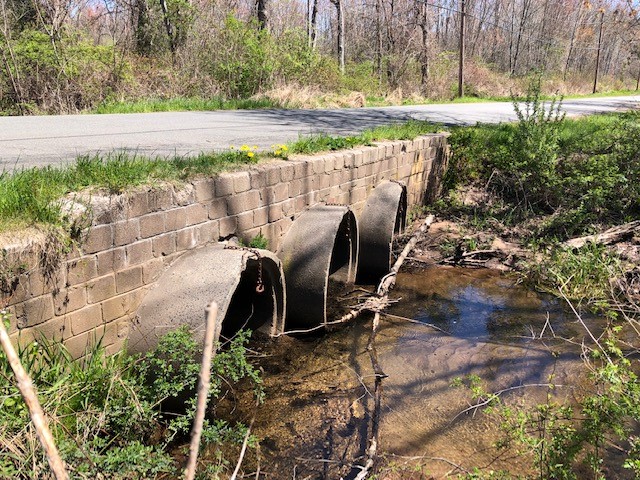 Culverts through which Sumner Brook passes under the road.

The Public Works Department consulted the Middlesex Land Trust, South Farms Fire District, the Middletown Police Traffic Division, and the Mayor about the option to close the road to motor vehicles and let it continue as a linear park for pedestrians and bicyclists. All parties found no objection to closing the road as recommended.  In fact, the Middlesex Land Trust, that owns most of the property on both sides of the road as part of the South Farms Preserve, had previously requested the road closure due to the frequent flooding and to protect local wildlife.  There are no abutting residences that require Lyceum Road for access. 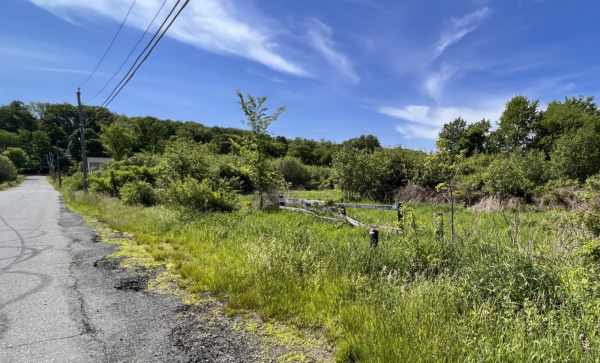 At the February 9 meeting of the Public Works & Facilities Commission, the Public Works Department explained that the road foundation is easily washed out due to flooding, resulting in road surface potholes. The road could theoretically be reconstructed with better drainage at an estimated cost of $750,000, plus permitting and inspection costs.  The damage to the animals and plants in the area from such a project would be severe — all for a 3/10-mile road that is no longer needed.

At the February 9 meeting, the issue seemed uncontroversial. The Commission unanimously approved closing the road to motor vehicles and allowing only pedestrian and bicyclist access. But at the April 13 meeting of the Commission, after the road had been closed for several weeks, some residents who live near Lyceum Road came to speak about the road closure—some in favor but more in opposition. The opponents cited the need for emergency vehicle access to the area, the need for Eversource to access the power lines, and the use of the road by agricultural vehicles. Deborah Kleckowski, Chairwoman of the South Fire District Board of Fire Commissions, spoke on behalf of the South Farms Fire District Board in opposition to the closure, even though the South Fire District Chief had approved the closure months earlier. After a lengthy discussion, the commissioners seemed ready to repair the road surface temporarily at a cost of $139,000 in order to reopen it. That approach was ratified at the May 11 meeting.

One might view this controversy as a minor dispute over minor impacts—a sort of “tempest in a teapot.” There are bigger negative impacts on Sumner Brook than those involving Lyceum Road.  What Sumner Brook needs is a study to tell us what the worst pollutants are: nitrogen from fertilizers, bacteria from horse stables and dog waste, petroleum from roadways, or something else? And where are the pollutants coming from? At the same time, the inconvenience imposed on the neighbors by closing Lyceum Road appears minor, since a newly reconstructed Wilcox Road ½ mile to the north crosses the same marshy area. Driving from Chamberlain Hill Road to Millbrook Road via Wilcox Road takes 94 seconds longer. 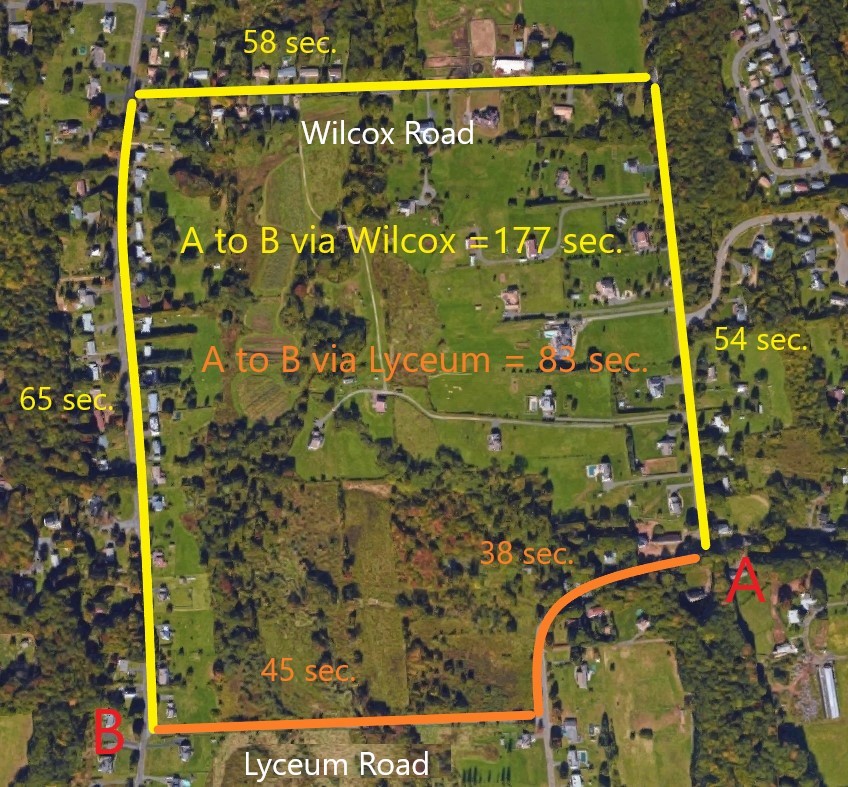 But what about the animals that live in these low-lying fields and wetland? Who speaks for them? Somewhere in the discussion, we need to acknowledge that our world’s ecosystem has already suffered from a vast accumulation of damaging human impacts—any one of which could be dismissed as “minor.” But the truth is that now every remote area of the world, from the top of the highest mountain to the deepest trench in the oceans, has been damaged by human pollution.

Is there any point when we will start to say “no” to more so-called “minor” impacts? Closing Lyceum Road seems like a perfect opportunity to save taxpayer money, soften our human footprint in this one area, and recover a little more space for birds, amphibians, reptiles, and wetland plants. With all our roads, parking lots, highways, lawns, and strip malls, we have pushed all the other forms of life into smaller and smaller spaces. Even our insect population has seriously declined.

The Public Works Department was right back in February when it stated that the city had better ways to spend over $750,000. Nobody knows how long the planned $139,000 surface repair of Lyceum Road will remain intact; but we do know that laying down more fresh asphalt will have some negative impact on the surrounding wildlife. When the potholes are back, we will need to remind the Commission of the original shared position of Middletown’s Public Works Department and the Middlesex Land Trust: close Lyceum Road (except for emergencies and power line maintenance). When that time comes, we will once again have a cost-saving opportunity to shift our priorities from human comfort and convenience to living with greater care for the wildlife we are causing to disappear. For now, unfortunately, it looks as if that opportunity is not being taken.

Update (as of June 15, 2022); A temporary asphalt “patch” (see below) has been applied to the Lyceum Road surface and the road has been re-opened for motor vehicle passage.  But the long-term future of the road has not been determined. We encourage the public to express views on the future of Lyceum Road (close or keep open) via email to the Common Council at Council@MiddletownCT.gov and to the Director of Pubic Works, Chris Holden. Chris.Holden@MiddletownCT.gov 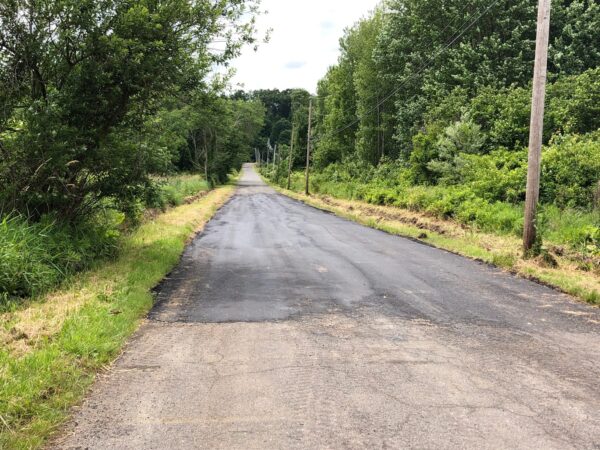