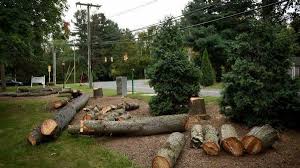 Middletown, historically known as the “Forest City”, has been losing trees for many years at a faster rate than it has been planting them.  With a small fixed budget for both tree removal (Public Works) and for tree planting and forestry services (Urban Forestry Commission), Middletown generally takes down between 50 and 75 dying or diseased trees per year. In the same period, twenty to thirty young trees are planted.  In 2019, the number will be well over 100 trees taken down. And, because the Urban Forestry Commission saw a need to spend several thousand dollars on safety pruning of old and historic trees, even fewer new trees than usual have been planted.

Losses among street trees result from natural aging, fungal disease, insect infestation, climate change, and all forms of mechanical assault – vehicles backing into trees, vandalism, the occasional homeowner who doesn’t like to rake leaves in autumn. Statistics show that the average life of an urban street tree is seven years – but that number is weighted by the fact that newly-planted trees have a high mortality rate. Young trees are the ones most susceptible to drought and damage.

The small tree budget also constrains another important activity – tree pruning. Trees that are not properly pruned as they grow are often the ones that suffer damage leading to early removal: a tree with an awkwardly-placed branch over the street may suffer repeated assault from passing trucks, and then becomes susceptible to disease or burrowing beetles.

Currently, much of the pruning done on street trees in Middletown is performed by utility contractors who are trying to keep utility wires free of tree branches. Sometimes trees that interfere with wires have to be removed altogether. This work adds to the loss of trees along our streets, since there is no budget for replacement.

The tree removal budget has been strained recently because of an unusual increase in early tree death: both white and green ash trees, frequently used as street trees, are rapidly dying from infestation by the Emerald Ash Borer, an insect that is nearly impossible to control on a large scale. According to a recent estimate by Middletown’s City Forester, there are more than 300 ash trees needing removal before they become hazards.

While Public Works has recently done an amazing job of planting trees in parks and in neighborhoods needing total replacement of ash trees, the net deficit of street trees has grown year over year.  The only way to overcome this trend is to greatly increase the number of trees planted, and to provide for proper post-planting care, including a budget for professional pruning.

As Professor Tom Crowther of the Swiss Federal Institute of Technology in Zurich wrote recently, tree planting “is a climate change solution…that is available now, it is the cheapest one possible and every one of us can get involved.”