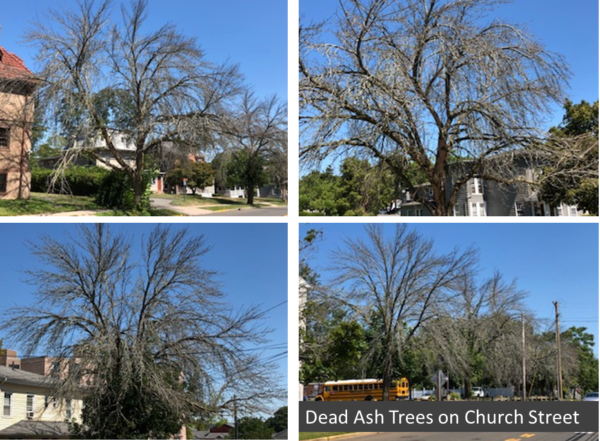 In recent years, the City of Middletown has removed dead and dying trees at a much faster rate than the city has planted new trees. Due to the Emerald Ash Borer, about 300 dead ash trees currently need to be removed, according to the Urban Forestry Commission. A line of dead ash trees along Church Street between Broad and High (shown here, before removal in late 2019) is one striking and sad example.  Only 20-30 trees will likely be planted city-wide in the current year, given the available budget. Removing a large tree is far more expensive than planting a younger, smaller tree. For this reason, the urban forestry budget is being exhausted by the need for tree removals.

To make a donation to the Replace Our Trees fund, click here.

Climate change is playing a role in this process, just when trees are more urgently needed to mitigate climate change. Invasive plants, changing insect populations, and damage by vehicles are additional negative factors.

This is all alarming news, since trees provide many benefits to a local community such as improved health due to better air quality and increased outdoor exercise, emotional well-being, beauty of the urban environment, and shade to provide cooling and reduced air conditioning demand. Studies have shown that crime rates are lower in urban neighborhoods with trees. On the global scale, trees absorb carbon dioxide from the atmosphere that leads to climate change, and trees produce oxygen that animals like us need to breathe. The persistent rise of carbon dioxide, even decades after the climate change alarms began to ring, require urgent action to stop deforestation from all causes and to plant more trees.

In response to Middletown’s multi-year tree loss, the Jonah Center has formed a partnership with the Urban Forestry Commission to address and reverse the decline of our urban tree canopy.  The Replace Our Trees Campaign has a two-part goal:

1.) educate the public in support of increased tree-planting and restoration of Middletown’s urban tree canopy, and

2) mobilize the public to support an increase of the urban forestry tree-planting budget from a mere $8500 to $58,500 so that the number of trees planted per year may increase from 25 to 100.

As we prepare for budget action to enable more tree planting, we are investigating means to gather inventory and canopy data, to enable the choice of optimal sites for new shade trees in our community.

You can help by signing the on-line Petition To Replace Our Trees below:

This petition is now closed.