Chantal Foster, Portland resident, is an accomplished hiker.  We are delighted to share her fascinating, humorous, and gripping tale of friendship, strength, trail sanitation regulations, and the effects of Acute Mountain Sickness as part of our “Alive Outside” creative writing initiative. Many of us are not capable of such an adventure ourselves, but this story will make you feel (almost) as if you were there.

Back in the beginning of 2018, esteemed hiker Bill Korp (aka Cupcake) came up with the harebrained idea of hiking Mt. Whitney in CA as a way of commemorating his 70th birthday.  Apparently, he didn’t feel like doing it alone, so he asked three of his favorite, well, maybe not favorite but “good friends,” well, maybe not good friends, but he did ask Steve Crusberg (Shuttle), Gina Wildermuth (Nurse), and yours truly (Olive Oil) to tag along.

Whitney is the highest peak in the contiguous 48 states at 14,496 feet (or 14,505, depending on where you look) which makes for a busy trail — so busy that would-be hikers need to apply for a permit through a lottery system.  Nurse and Cupcake coordinated the necessary paperwork to apply for such in February and in April, with luck on our side, we were awarded a permit to hike Whitney on the auspicious date of Wednesday, July 25th.

Travel and lodging plans were discussed, determined and made, and we proceeded to study how to hike “Whitney in a Day,” training accordingly while waiting for the big event.

Soon, mid-July was upon us.  With much training, a couple of challenging “prep hikes” under our belts and a lot of anticipation, we flew into Las Vegas and made the approximate 5-hour drive west to the town of Lone Pine, CA where we would make our home for the next five days.  On our way, we passed through Death Valley with elevations around three hundred feet BELOW sea level.  We would be on both the highest and lowest points of the lower 48 during our trip. 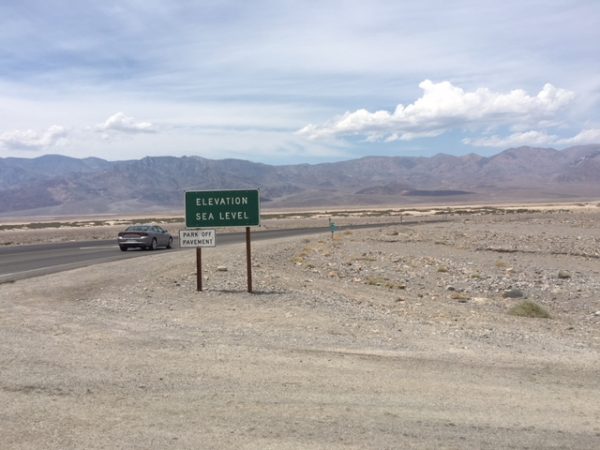 After getting settled in our Airbnb, our first order of business was to check out the trailhead we would be hiking in just a few days.  The Whitney Portal (at 8,361 feet) is a busy place with a store, campsites, and yes, the trailhead.  Not to mention a LOT of people and the occasional bear!  We checked out the trailhead and decided to hike the first 2.5 miles of it the following day, up to Lone Pine Lake (9,960 feet) which is just outside the Whitney Zone and doesn’t require a permit for hiking.  This 5-mile round trip on Sunday was our first acclimation hike, and we were rewarded with some spectacular views of the area. 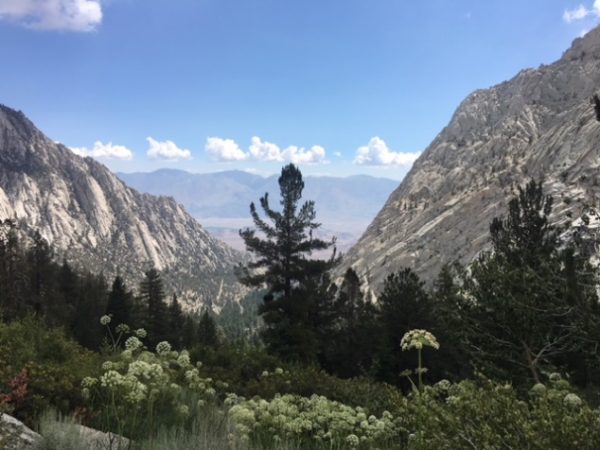 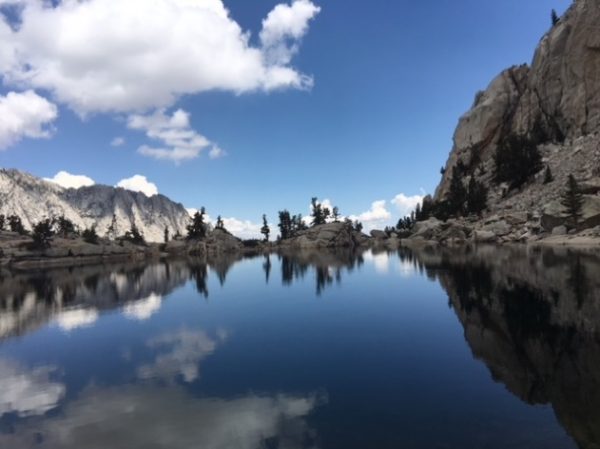 On Monday, we headed into town to pick up our hiking permits, which was very exciting and suddenly made it all very real.  In addition to our permits, we were issued “WAG bags” to be used for carry out purposes.  If you are curious about WAG bags, please access this link (which kind of gives it away):  https://www.briangreen.net/bbb/2011/09/carrying-your-poop-wag-bag-waste-kit.html

If you don’t want to bother with the link, I’ll simply mention that WAG stands for Waste Alleviation Gelling.  It sounds very relieving.  How do they come up with this stuff?  In any case, after getting our permits and WAG bags, we drove to see the Ancient Bristlecone Pine Forest and did another acclimation hike to an elevation close to 10,400 feet. 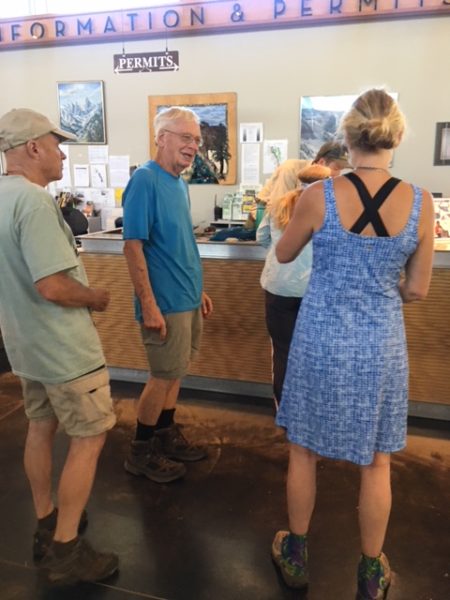 The final day before “the big one” was a day of rest.  We drove up to Onion Valley at around 10,000 feet, spent a couple of hours relaxing and eating lunch.  After that, we had a very substantial (and early) dinner so we could hit the hay and be ready for the near 22-mile round trip hike on Wednesday!

Some of us were able to sleep, others were not so lucky but regardless, we were all in the car at 2:30 in the morning for a 3 am start time at the Whitney Portal.  Cupcake took off so fast we didn’t have a chance to say goodbye to him. 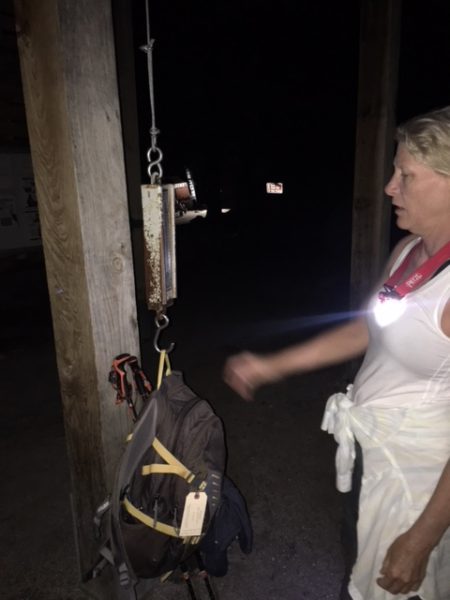 Nurse and I stopped at the scale to weigh our packs and then started off on our steady pace, headlamps blazing.  Shuttle, the only sensible one in our group, went back to bed to grab a couple more hours of sleep before starting his hike up to Trailside Meadows, about an 11-mile round trip, which he had decided to do in between shuttling us to and from the trailhead. 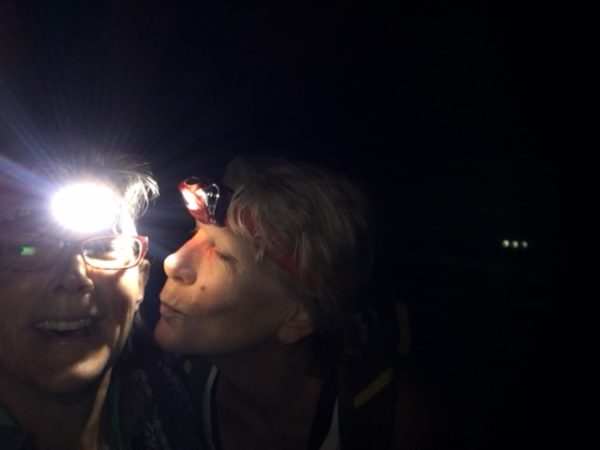 With Nurse in the lead, we made excellent progress past Lone Pine Lake, into the Whitney Zone.  It was comforting to have already hiked the first couple of miles of the trail just a few days earlier, so we knew what to expect at the very beginning.  But I was more than a little concerned with the dicey water crossings we encountered after Lone Pine.  Water crossings are not my friend and dealing with them in the dark with a headlamp, well, let’s just say I was glad when they were behind us.

As we approached Trailside Meadows, we took in a beautiful sunrise.  Finally able to turn off our headlamps, we made it to Trail Camp in 4 hours — we had hiked 6.3 miles and 3,678 feet of elevation — we were better than halfway up! 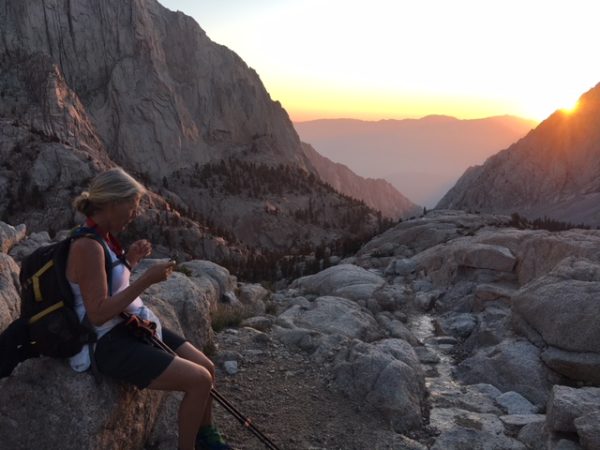 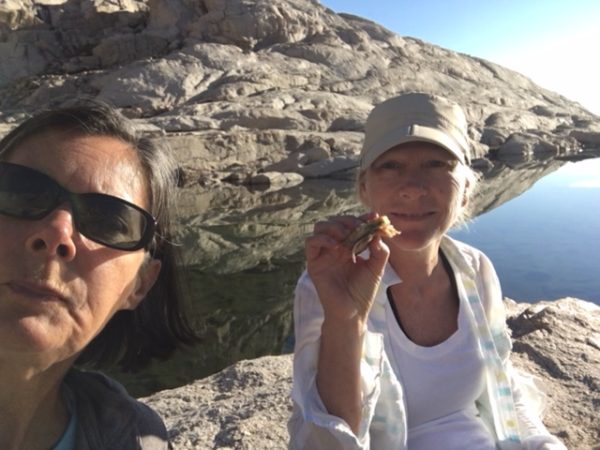 We took a leisurely break here, eating our smoked salmon sandwiches and filtering water.  We spied a very aggressive marmot and some chipmunks.  Many hikers had spent the night here; it is one of a handful of available camping spots on the Whitney Trail for those who wish to break up the trek into smaller chunks.  The wildlife always hangs out where there is a possibility of receiving a handout or, more likely, perpetrating theft on unsuspecting hikers.

Setting off for Trail Crest, we found ourselves on the infamous “99 Switchbacks,” claimed to be the most challenging part of the trail.  Truth be told, the trail itself is very well-constructed and accommodating, with mostly easy footing and modest to moderate grades.  The two challenges of Whitney are the length of the hike (if done in one day, but we had trained for that) and the altitude — something you can try to acclimate for, which we did, but it is a real wildcard.  There is no way of telling if you will be affected by Acute Mountain Sickness (AMS) or not.  The switchbacks are where most people start to feel the effects and our pace slows somewhat through this 2.2 mile section with an elevation gain of 1,738 feet.  When we reach Trail Crest, Nurse and I sit down to catch our breath, and she promptly turns her head and barfs over the side of the mountain.  Several times.  She composes herself and does a run through of how she is feeling:  slight headache, but no swelling of hands or dizziness and after relieving herself of the sandwich, water and other snacks, she claims to feel better.  She wants to go on. 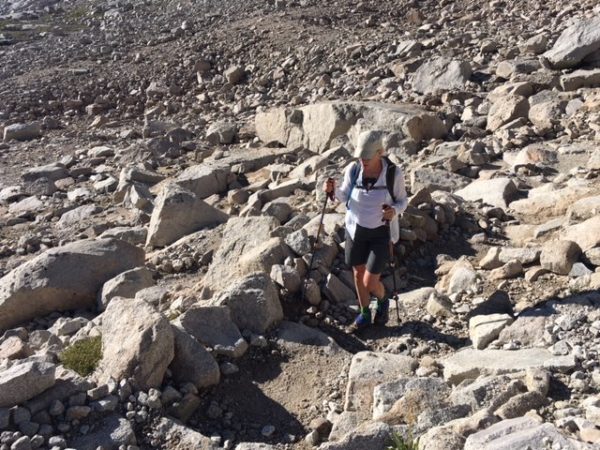 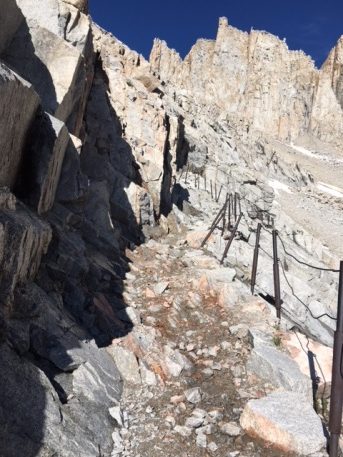 The next section of trail actually descends almost 300 feet, so we move ahead and Nurse seems OK.  A half mile later, we find ourselves at Trail Junction after taking in some spectacular views.  The trail skirts the very edge of the mountain, this is an area where the footing is NOT so easy and for Nurse who doesn’t like heights, well, she’s happy when it’s over. 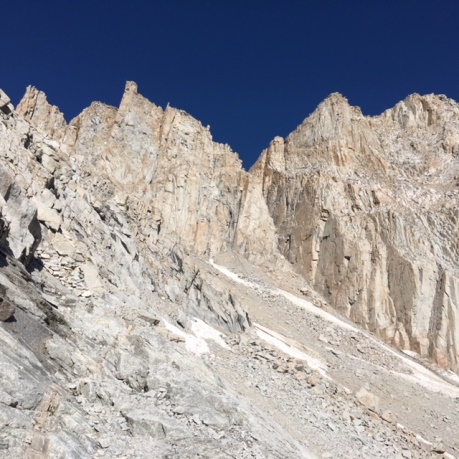 And just then, who do we see coming down the trail but Cupcake with a big smile on his face.  He had summited Whitney sometime around 9:30 am and at 10:45 when our paths crossed, he was on his way down with lightning speed. 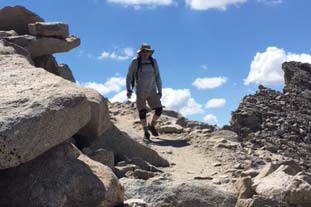 He stopped only to say a few words and then was gone.  Bill made it back to the trailhead by 3:15 pm — so a twelve and a quarter hour round trip for him, which is (characteristically) excellent time.  Congratulations, Cupcake!

Nurse and I continued at a slow pace, I could tell she wasn’t feeling good and was concerned, but chose to let her make the call.  We played leapfrog with others on the trail also experiencing symptoms of Acute Mountain Sickness (AMS).  Time was going fast, and we were going slow until Nurse sat down and let go of all she had tried to replenish herself with.  She could not go on.  We were less than a mile from the summit.

My dear hiking partner with whom I have summited many peaks, hiked over a thousand miles, spent dozens of nights in a tent or a hut and schemed about this trip and many, many others is telling me to go on and summit while she starts down the mountain, which is the only thing that will make her better.  I am reluctant to leave her, but she insists I go on and take pictures at the summit with a special sign she had thoughtfully made to observe Bill’s birthday.  I am very reluctant to leave her, but again, she insists.  Time is getting short, weather has been coming in on the mountain every afternoon we have been there, and I could see clouds thickening.  Today was no exception.  I shoved the special sign in my shorts and took off.  We were both crying. 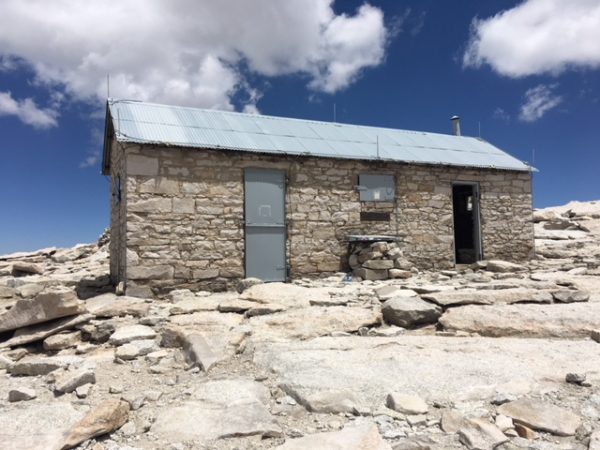 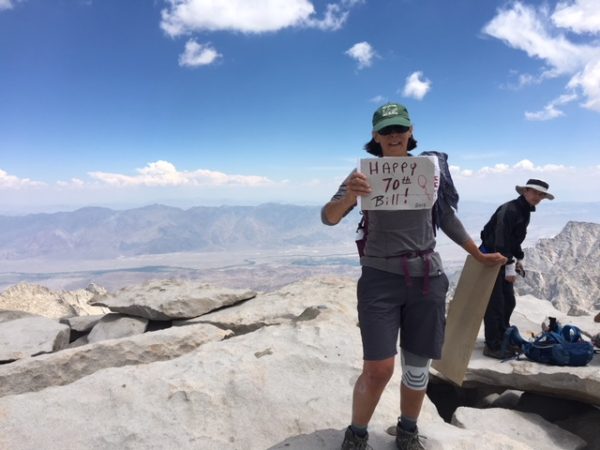 The summit was bittersweet and quick.  I took the obligatory pictures and headed down to catch up with Nurse.  On the way, I stopped to filter more water as we had gone through our supply.  I found Nurse on the switchbacks and was relieved to see she had made pretty good time considering how crappy she must have felt, though throughout this ordeal, she never complained for one second.  We made it to Trail Camp to pick up some water we had stashed there, and Nurse was sick one more time.  I couldn’t believe she was able to move under these conditions, let alone hike.

By the time we reached Lone Pine Lake, Nurse regained her steady pace and her typical jovial disposition.  She had been mostly quiet during the long slog down, but reaching the lower altitudes finally made her feel better and we started rehashing the events of the day as we finished the last couple of miles on the trail.  Happy to not need a headlamp on the way down, we exited the trail just before 8 pm to find our beloved Shuttle awaiting our arrival.  We had tried to let him know we were running a little behind our expected 7 pm completion time, but cell reception is pretty spotty in these parts.  He was relieved when he finally heard from us, as the Whitney portal had experienced a bad thunder and hail storm shortly after Bill exited the trail.  Shuttle worried we had been caught in that storm, but we were lucky to be on the other side of the mountain when it happened.  Thankful to have made it down safely, we piled into the car and headed home.

Summary:  Most of the hiking I’ve done has been in the Northeast.  By comparison, the footing on the Whitney Trail was a breeze.  With the exception of the potential weather problems (which we were very lucky to avoid) and the issues with altitude (which we were not), this is a very doable trek for a well-conditioned hiker.  While the scenery is like nothing I’ve seen in New England, the experience with the altitude has made me appreciate the many challenging and beautiful hikes we have available to us within a few hours drive.  There are many more 4,000 footers awaiting our footsteps.