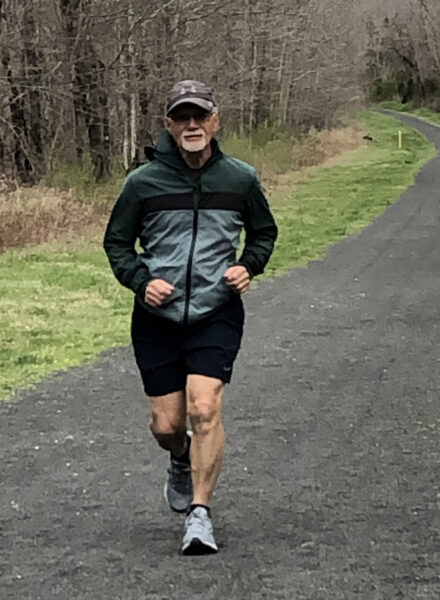 Since 1980, Bob Sequenzia has been running and walking on the Air Line Trail, even when it was an overgrown dirt path prior to its reconstruction for public use in 2016. He runs year-round, but when there is deep snow on the ground he runs a loop on local roads — Job’s Pond, Middle Haddam, Penfield Hill, and Pepperidge. He enjoys the feeling of accomplishment from finishing a run. He starts out with his wife Barbara, also an avid exerciser, before they diverge onto their different routes. Since the pandemic began, Bob has ramped up his routine to 6 days a week, covering 30-35 miles per week on average.

Over the years, he’s spotted a wide variety of birds — such as a bald eagle on top of the cell tower — deer, coyote, fox, bobcat, turtles, and snakes. But he reports that since the Air Line Trail became less wild and more heavily used by humans for recreation, wildlife sightings are less frequent.

Asked what motivates him to keep running, Bob said, “I started running to stay in shape and drop a few pounds. But over time I noticed that it helps me with my cholesterol. It raises my HDL level – the good cholesterol. And after a run my blood pressure is lower.”

What advice does Bob have for someone starting an exercise routine? “Start slowly and gradually increase the distance (10% each month) to avoid sprains, muscle tears, shin splits, and foot problems. I find that keeping a log – including the date, distance, and what I saw, etc.— is an added motivator. Having an exercise partner helps too.”