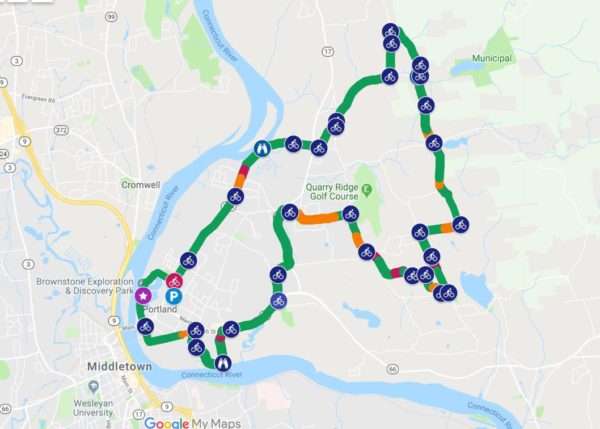 The Jonah Center recommends a scenic 16.3 mile bike route in Portland that makes a counter-clockwise loop beginning at the post office, and passing the quarries and several scenic views of the Connecticut River, ponds, and streams.  The route (pictured here) is designed to maximize safety and avoid the steepest hills, while still covering a fair amount of distance. (Note: The Town of Portland, in its adoption of town-approved bike routes in December 2018, rejected this route, due to the section along Route 66, in favor of an alternate 15 mile route that utilizes Main Street instead of Route 66. )

Cyclists are advised to check out the route by car before cycling, in order to insure suitability for a given individual. Clearly, cycling on public roads carries obvious risks that each cyclist must evaluate.

The Jonah Center, along with Coginchaug Area Transition and Ecosattvas Connecticut, invites the public to a free viewing of a 22 minute film, A Plastic Ocean, on Tuesday, October 16, 7 p.m. in Room 208 of Fisk Hall, 262 High Street, on the Wesleyan campus.  Parking is available in the rear of the building off College Street. After the film, there will be a discussion about ways to combat plastic pollution.

From the filmmakers: “In the center of the Pacific Ocean gyre our researchers found more plastic than plankton. A Plastic Ocean documents the newest science, proving how plastics, once they enter the oceans, break up into small particulates that enter the food chain where they attract toxins like a magnet. These toxins are stored in seafood’s fatty tissues, and eventually consumed by us.” 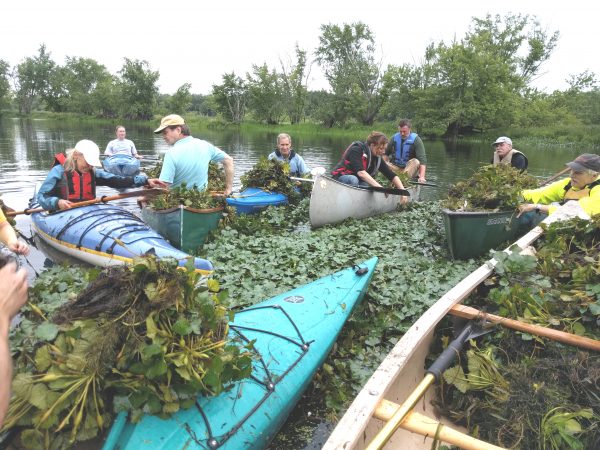 This coming Sunday, September 16, from 9 to 11 a.m., paddlers will unite in a big effort to remove the remaining water chestnut plants from the lower Mattabesset River in the Floating Meadows between Middletown and Cromwell. If we can get about 20 paddlers, we have a good chance of clearing the main stem of the river for the first time in 5 years.

We will launch from the canoe and kayak launch at 181 Johnson St. in Middletown. For last minute questions in case of iffy weather, call or text John Hall at 860-398-3771.

While we prefer not to schedule paddles on Sunday, we are doing so in this case due to the Sunday availability of paddlers with canoes and in order to have higher water in the ebbing tide. Tide will be high at approximately 8 a.m. on Sunday. Tide is one hour earlier on Saturday.

Bags and gloves will be provided.  Paddlers are required to wear life jackets and to sign a Jonah Center liability waiver and photo permission form. A porta-potty is located at the launch site.