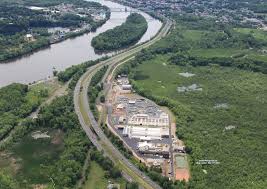 Mattabassett District Sewage Treatment Plant in Cromwell. Wilcox Island and the Arrigoni Bridge are visible at the top of the photo.

As described in a previous post, a sewage spill of 3.6 million gallons from the Mattabasset District plant on October 30, 2017, raised some obvious concerns and questions. In early January, John Hall met with the Mattabassett’s Executive Director Art Simonian to get some answers.

According to Mr. Simonian, the October 30 “bypass event” occurred after heavy rain forced storm water into the pipes via the seams that connect one pipe to another. This produced a larger volume (a mixture of storm water and sewage) reaching the treatment plant. As a consequence and to avoid flooding the plant itself, 3.6 million gallons of partly treated sewage needed to be discharged into the Connecticut River over a period of hours while the heavy rain and storm runoff continued. END_OF_DOCUMENT_TOKEN_TO_BE_REPLACED