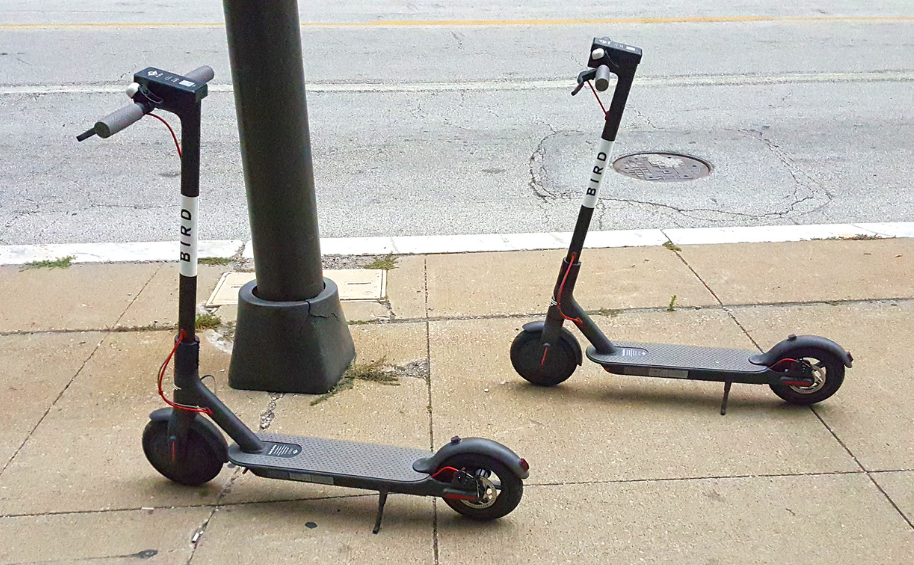 You may have noticed the electric scooters and bikes parked on sidewalks in downtown Middletown and neighborhoods near the Wesleyan campus. The program offers new ways for people to get around without driving. END_OF_DOCUMENT_TOKEN_TO_BE_REPLACED 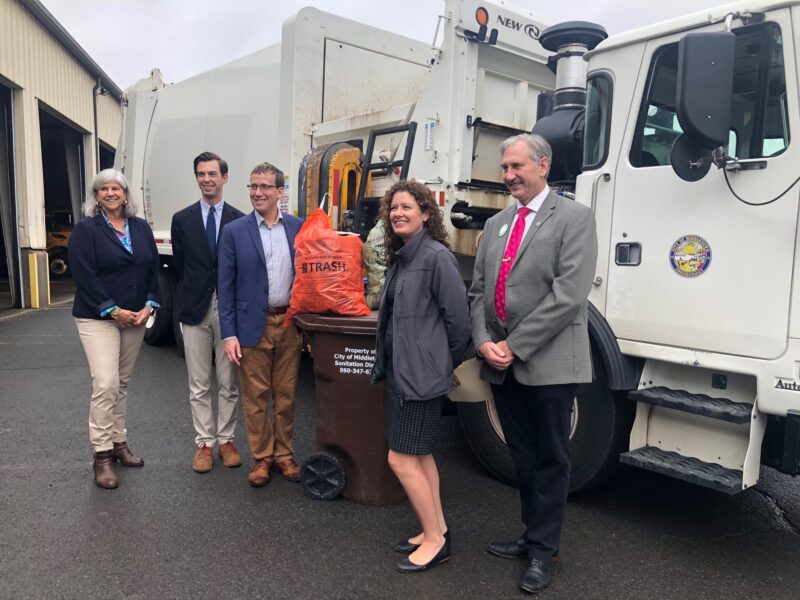 The City of Middletown has received a state grant of $350,000 for a one-year pilot project on curbside food-waste collection in Middletown’s Sanitation District.  Now we need citizens (whether we live in the Sanitation District or not) to learn about this program, help make it successful, and advocate for its continuation. END_OF_DOCUMENT_TOKEN_TO_BE_REPLACED 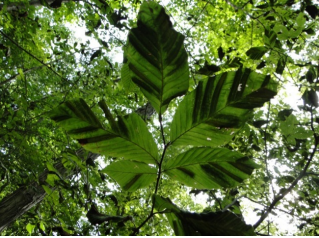 Dark green striping or other discoloration between veins of beech leaves indicates disease.

Although Beech Leaf Disease has been observed in the U.S. since 2012, little as yet is known about the spread of the disease, and a cure is still to be found.  While it is most often seen on younger forest trees, it can spread to, and kill, ornamental European beeches, including the enormous purple and copper beeches seen in of large estates and cemeteries. Typically, the first sign of the disease is in the form of thinning leaf canopies.

While it is known to spread via a nematode, the way that the nematode infects the trees is not well understood.

Beeches have suffered for some time from Beech Bark Disease, and trees already weakened by one disease will be more susceptible to the other. More information is contained here, including diagnostic photos of infected leaves. 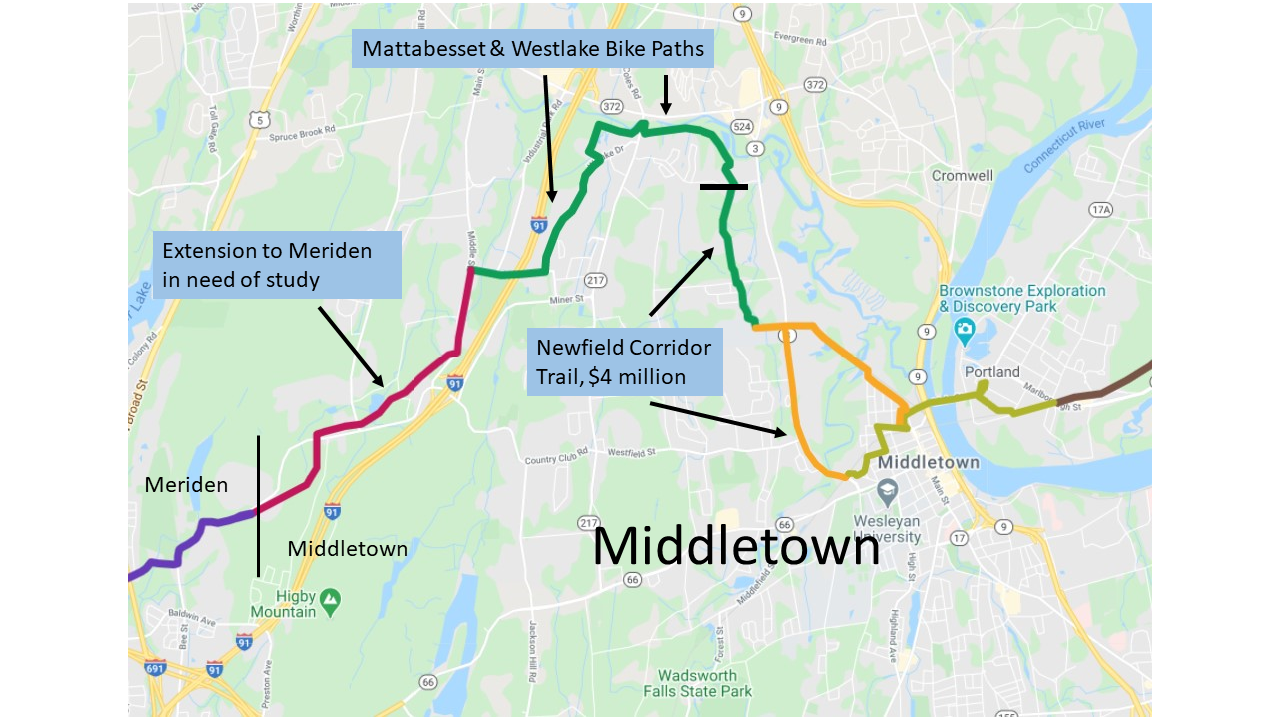 The Jonah Center’s most far-reaching project — to connect the 2 longest multi-use trails in Connecticut — has been awarded 2 grants: a $315,000 route study grant by CT DOT this past February; and a $500,000 grant by the state bond commission in April. The bond commission grant will allow preliminary design work to be done on at least some sections of the connector route. We are well on our way to making the connector route a reality for regional bicyclists.  END_OF_DOCUMENT_TOKEN_TO_BE_REPLACED 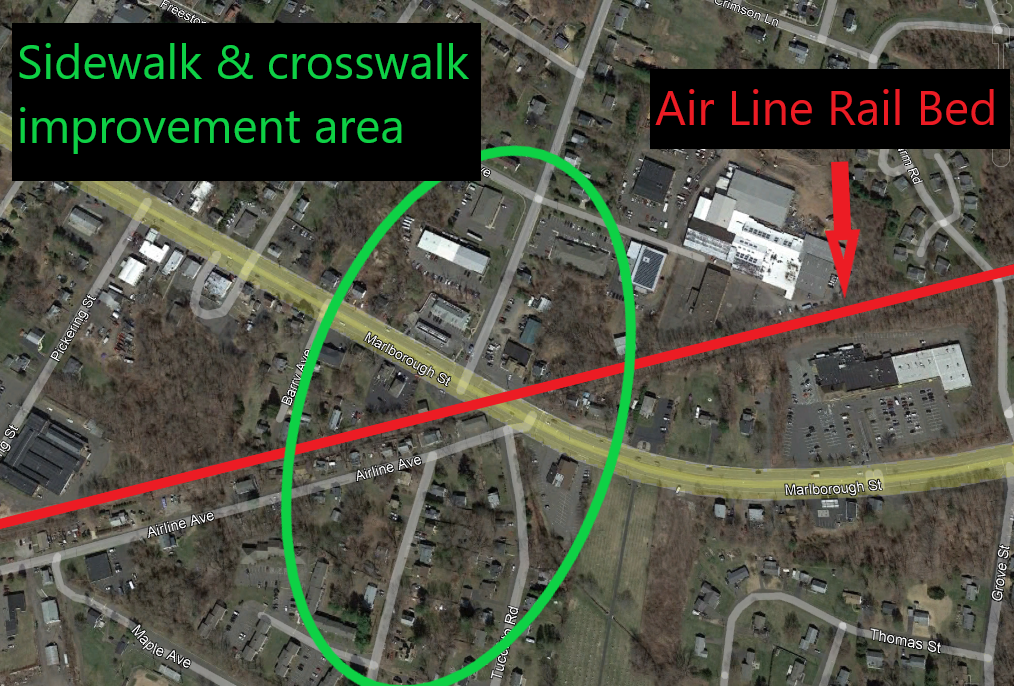 Portland walkers will enjoy expanded and repaired sidewalks over the next year or so. END_OF_DOCUMENT_TOKEN_TO_BE_REPLACED 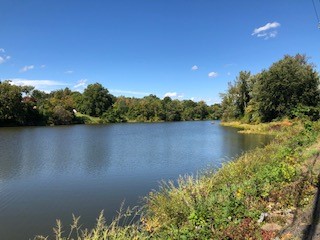 What will happen to Pameacha Pond? 4 years have passed since Connecticut’s Department of Energy and Environmental Protection (DEEP) and the city of Middletown signed a consent order in August 2018 requiring the relocation of a main sanitary sewer line from the dam’s discharge culvert and the repair of the Pameacha dam.  For decades, DEEP had expressed concern about deterioration of the dam, but when another break (like numerous previous ones) in the sewer line in June 2018 resulted in the discharge of raw sewage into Long Hill Brook, DEEP required the city to take certain steps leading to the repair of the dam.    END_OF_DOCUMENT_TOKEN_TO_BE_REPLACED 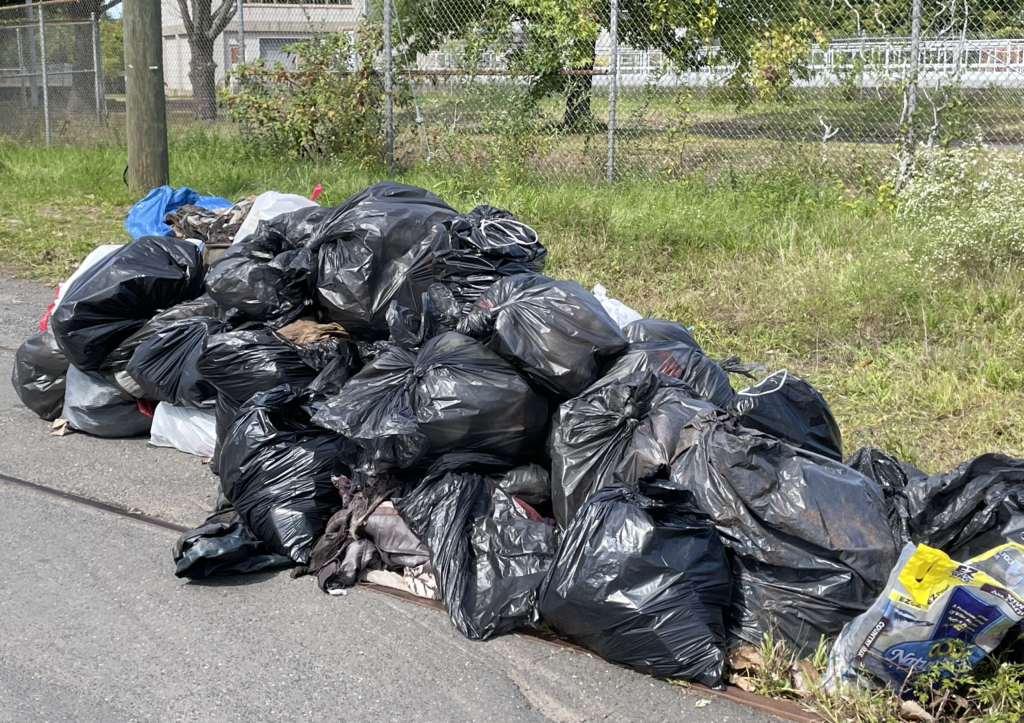 On September 24,  35 hard-working volunteers removed many bags of trash, a mattress, 5 tires, several coolers, discarding clothing, and many other items from River Road and the shore of the Connecticut River near the decommissioned sewage treatment plant. Shown here is about ½ of the total of the Jonah Center’s haul. END_OF_DOCUMENT_TOKEN_TO_BE_REPLACED 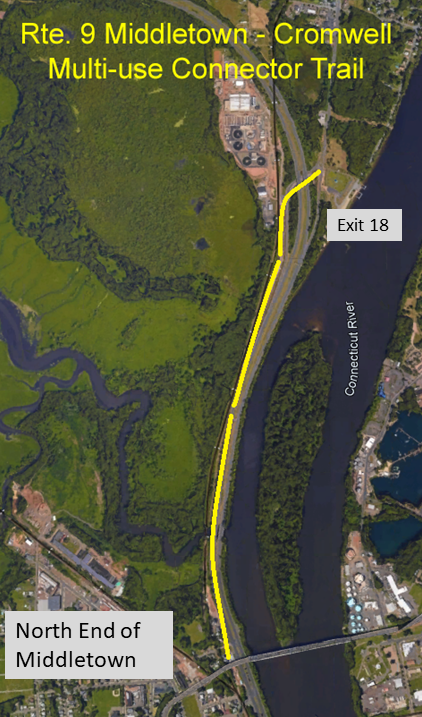 The proposed connector trail is indicated by the yellow line. The Arrigoni Bridge is at the bottom.

Let’s make it possible to bicycle or walk safely from downtown Middletown to Main Street in Cromwell via a multi-use trail constructed on the existing access road the lies parallel to Route 9, between the highway and the railroad tracks.

Here’s the background: Governor Lamont’s Executive Order No. 21-03, signed on December 16, 2021, lists actions to be taken by CT State agencies to achieve the goals of the Governor’s Climate Change Coalition (GC3).  Among them was this item:

DOT shall set a 2030 vehicle miles traveled reduction target and develop a plan of investments to contribute to and encourage the achievement of such targeted reductions. END_OF_DOCUMENT_TOKEN_TO_BE_REPLACED 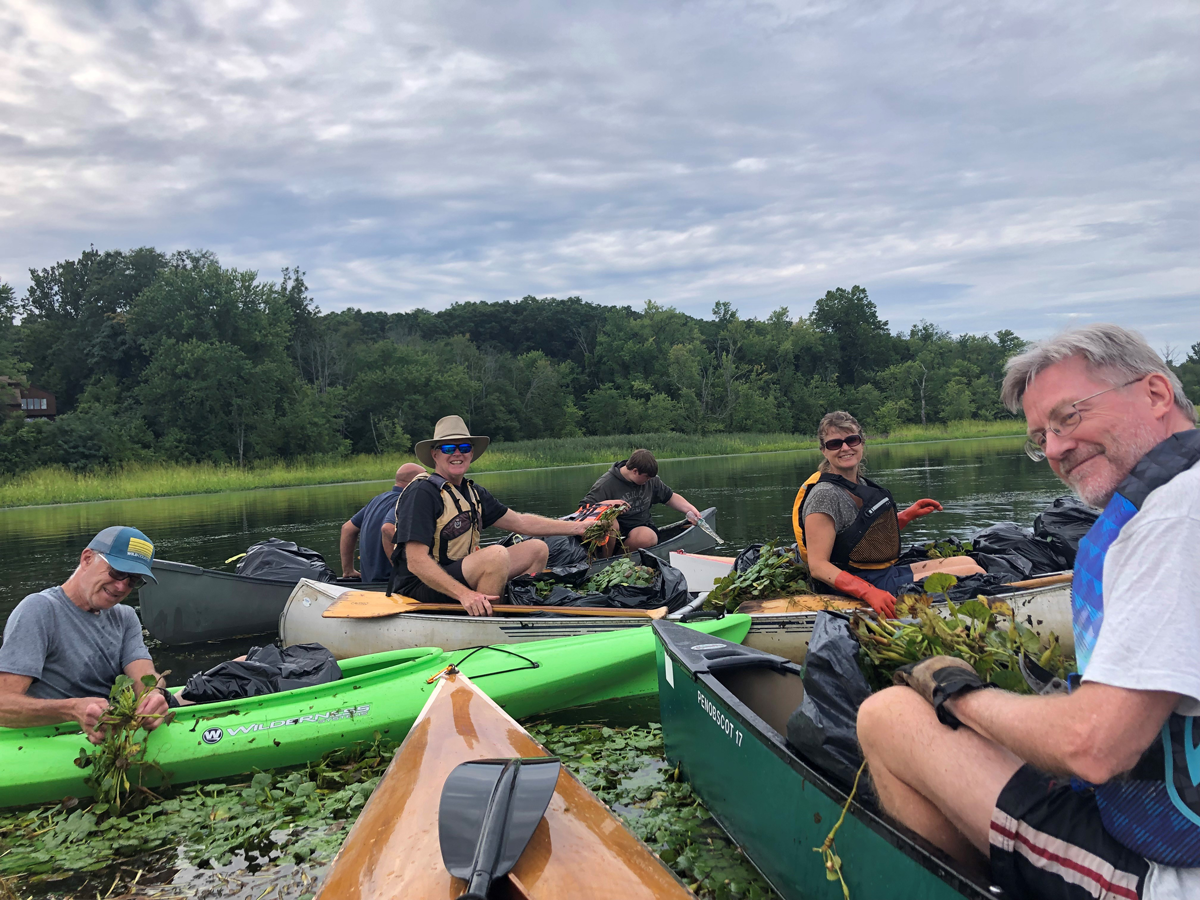 In spite of a heavy downpour that ended just 30 minutes before the scheduled launch time of 5 p.m. on August 17, 41 paddlers showed up to save Pecausett Pond in Portland from a serious infestation of water chestnut. Our goal was to remove several large, dense patches and many isolated plants before their nuts dropped.  Water chestnut (Trapa natans) is an aquatic invasive plant imported from Asia in the 1880s.  Once established, the plants can cover freshwater ponds and river coves, cutting off sunlight and oxygen that fish require. END_OF_DOCUMENT_TOKEN_TO_BE_REPLACED 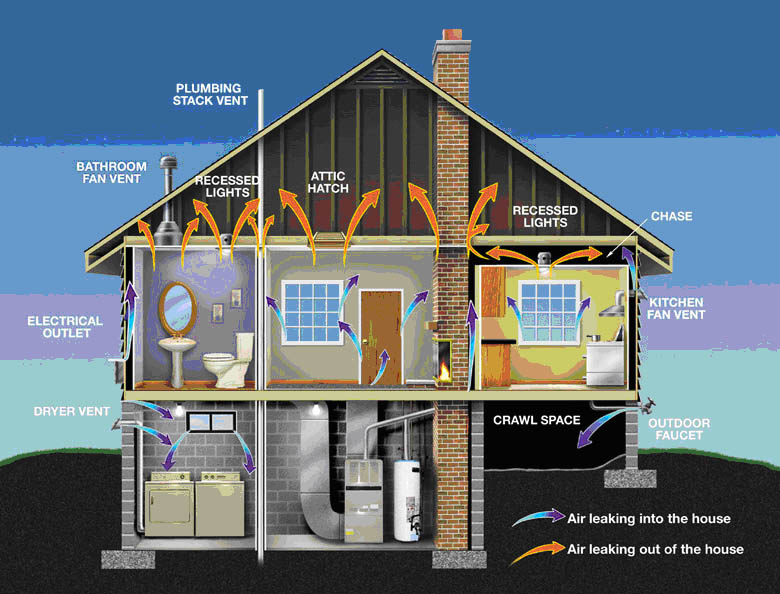 Energy prices are rising, as our readers have probably noticed.  The Jonah Center urges our readers to take advantage of the State’s Home Energy Solutions (HES) program, and other low-cost, high-return opportunities to make your home more comfortable and energy efficient. This program, subsidized by the Connecticut Energy Efficiency Fund, reduces home utility costs, on average, by $200 per year. The co-pay for HES is $50, and $0 for income-eligible residents (up to 60% of the state’s median income level). Your home will have air leaks sealed, energy-efficient light bulbs and shower heads installed, and insulation evaluated. Those who take advantage of HES services will learn about low cost, subsidized insulation options.  Visit EnergizeCT or call 877-947-3873 to get started. 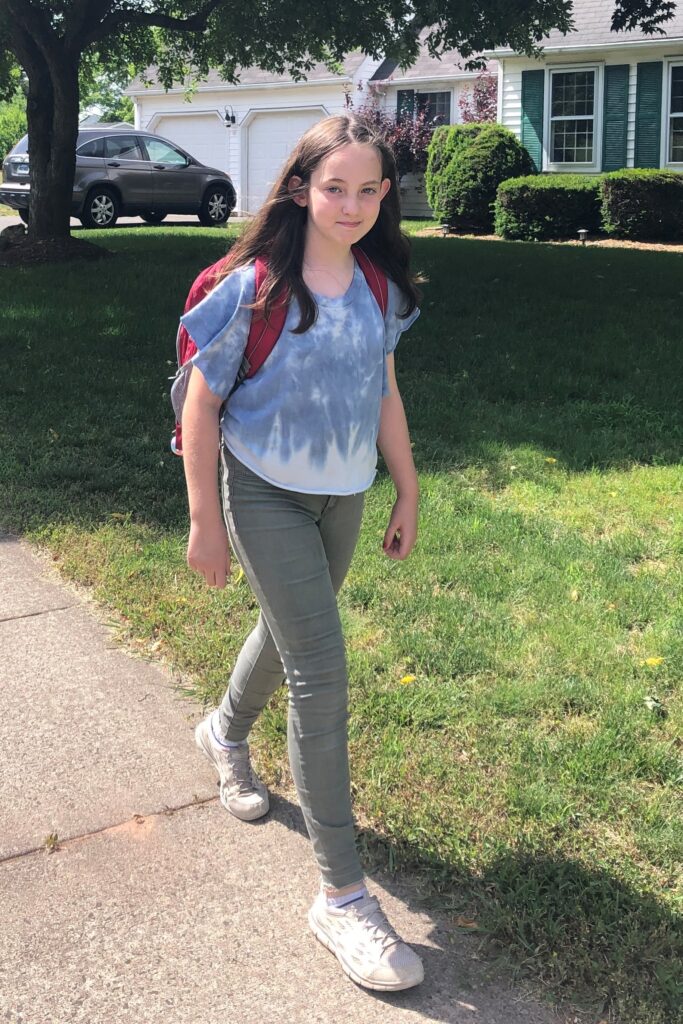 Cora Chenier is a proud and happy walker.

The coronavirus pandemic has been hard on everyone, but especially on elementary school children. It’s an age of rapid development – intellectual, social, and emotional. When students had 3 days per week of “virtual” classes from home, learning was limited. Children’s development was restricted just when it needed stimulation through adventure, growing independence, and socializing with classmates. END_OF_DOCUMENT_TOKEN_TO_BE_REPLACED 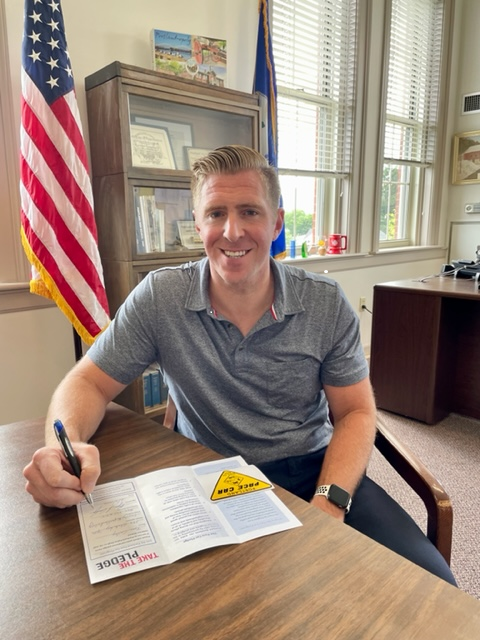 First Selectman Ryan Curley was the first to sign the Pace Car Pledge.

Portland’s Complete Streets Group (CSG) invites Portland residents to participate in the Pace Car program by signing a pledge to drive safely, courteously, within the speed limit, and to share the road with pedestrians and cyclists. A Hartford Courant article published on 3-19-22 stated that the number of pedestrians struck and killed by cars on Connecticut roads has more than doubled in the past 10 years. Factors cited include speeding and distracted driving. Portland Complete Streets Group has introduced this Pace Car program as a traffic calming initiative to address these factors. END_OF_DOCUMENT_TOKEN_TO_BE_REPLACED